Department of Agrarian Reform officials led by Secretary John Castriciones with La Trinidad officials led by Mayor Romeo Salda sprearhead the ribbon cutting and turn over ceremony of the solar power irrigation system in Barangay Alno, La Trinidad, Benguet on Thursday, April 8, 2021. The P800, 000.00 irrigation system was turned over to the Alno Rural Community Development Cooperative which is expected to provide water to more than 15 hectares of cut flower and vegetable farms in Alno. RMC PIA-CAR

POPCOM Regional Director Magdalena Abellera(3rd from left) and partner panelists in the forum push for a whole of society approach in addressing women's concerns including repruductive health in this time of health pandemic. (CCD/PIA CAR)

BAGUIO CITY – The Baguio City Police Office (BCPO) arrested a person who was identified as the one who brought the shabu-laden adobo (pork stew) for an inmate of the Baguio City Jail Male dormitory (BCJMD). 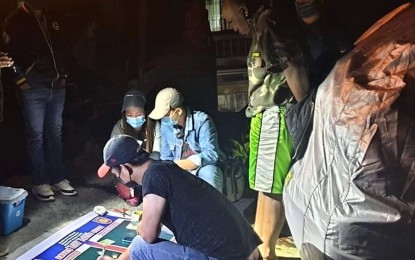 ARRESTED. The Baguio City Police Office (BCPO) arrest Jhon Raymond Cariño, also known as “Michael Aldawood", who attempted to sneak in adobo with shabu inserted inside the meat on Feb. 12, 2021 for an inmate at the Baguio City jail male dormitory. Cariño was arrested four days later in a buy bust operation after he sold five grams of shabu worth PHP18,500 to an operative of the BCPO- Drug Enforcement Unit (DEU). (Photo courtesy of PROCOR-PIO)

He said the suspect was arrested after selling five grams of shabu worth PHP18,500 to an operative of the BCPO- Drug Enforcement Unit (DEU) who acted as poseur buyer.

Two other sachets of suspected shabu were also recovered from the suspect. The additional items recovered weighed one gram valued at PHP6,800.

Abellanida said that Cariño has been on the list of high-value target (HVT) of the PNP for his involvement in the illegal drug trade.

“Fortunately, he was identified as the same person who brought the adobo containing shabu (worth PHP136,000) at the Baguio City jail on Feb. 12 but eluded arrest,” the police officer said.

Abellanida said the suspect has been on the radar of the police and his identification in the closed-circuit television (CCTV) camera footage provided by the city jail management allowed them to confirm his continued active involvement in the illegal drugs trade.

He said the arrest of the suspect is proof that people who engage themselves in illegal activities cannot hide forever or escape from the law. (PNA)